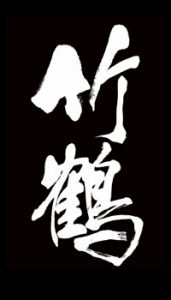 Masataka Taketsuru is born in Hiroshima, Japan on June 20th.

Rita is born in Kirkintilloch,
Scotland on December 14th 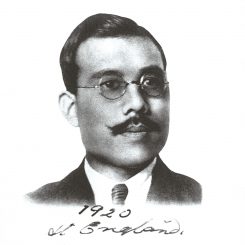 Settsu Shuzo sends Masataka to Scotland for its plan to produce Japanese whisky.

Masataka embarks from Kobe in July and arrives in Scotland in December after visiting wineries in San Francisco.

Masataka Taketsuru, son of a sake brewing family, enters the Settsu Shuzo Company which has a plan to produce the first authentic Japanese whisky. With a background in chemistry, the young man leaves for Scotland with the aim of discovering the secrets of whisky production.

During his time in Scotland, Taketsuru learns about whisky production by working in various distilleries, fuelling his dream to make an authentic whisky in his homeland. 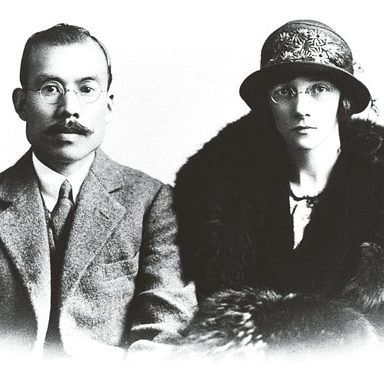 Masataka and Rita leave Scotland and arrive at Japan’s Kobe port in November.

In 1918, the young Japanese Masataka Taketsuru traveled to Scotland to learn the ways of making whisky. While studying at the University of Glasgow he met a student, Elle Cowan, who asked him if he could teach Judo to her little brother Ramsay. In Masataka’s occasional trips to the Cowan’s house in the town of Kirkintilloch, he met his future wife Jessie Roberta Cowan, known as Rita. They fell in love, and as their story began, so did the story of The Nikka Whisky Distilling Company.

Masataka had told Rita about his dream of whisky making and the reason he came to Scotland, and the two continued to grow closer. On one date at the Princes Street Gardens looking up at the Edinburgh Castle, Rita confessed to Masataka that she had a fiancé who she lost in the World War. This touched Masataka’s heart and day by day their feelings to be together were growing. Finally in September of 1919 at the lakefront of Loch Lomond, Masataka proposed to Rita. She accepted.
Masataka was considering staying in Scotland to marry Rita. However, Rita disagreed. “We should not stay in Scotland”, she said. “We should head to Japan. Masataka-san is living a big dream, a dream to make whisky in Japan. I want to live your dream together.”

A CENTURY AGO IN SCOTLAND, LOVE PREVAILS

In a time when international marriage was not common, both families were hesitant towards their marriage. However, this did not stop Masataka and Rita from visiting the Calton district registration office on January 8, 1920 where they became husband and wife.
Soon after their marriage the two moved to Campbeltown where Masataka apprenticed at the Hazelburn Distillery under Dr. Ines. During this time the worries from both families had gradually resolved and their marriage was finally celebrated in Glasgow. Upon Masataka finishing his apprenticeship in Campbeltown, the two arrived together in Japan in November 1920.

After arriving in Japan, Rita quickly picked up the Japanese ways of living. She learned the language, the cooking, and even learned how to dress in a kimono. She made all the efforts to adapt to her new envrionment.
Masataka, in the meantime, noticed that the situation in Japan had changed since he left for Scotland. The recession after WWI had hit the economy. Settsu Shuzo, the company who had sent Masataka to Scotland, no longer had the financial luxury to invest in a new business. Masataka’s whisky project was officially declined and he left the company in 1922. He was fortunate to find a job as a science teacher through Rita’s friend while Rita started giving private English lessons to help the household. In the following year, Masataka was offered a job at Kotobukiya to make whisky for them.

In 1934, after Masataka finished his 10- year contract with Kotobukiya, he and Rita made a big step forward to make their dream come true. With the help of investors, Masataka established his new company in the land of Yoichi, Hokkaido. It was not by coincidence that the main investor Shotaro Kaga was the husband of one of Rita’s English class students. She also had previously taught English to the 3 daughters of Matashiro Shibakawa, another main investor who eventually became a longtime contributor for Nikka.
In the early years, the company produced various apple products to sustain the business while it waited for the whisky production to catch up. Apple juice, apple jelly, apple sauce, and apple wine was what supported Masataka’s new business. Because of this, at Nikka Whisky, apples are often associated with Rita to pay homage to the way she supported Masataka, just as apples supported Nikka.

Nikka Whisky survived the test of time. From the late 1940’s to the 1950’s, Masataka’s whiskies gained recognition for its quality and the company continued to grow. Meanwhile, Rita and Masataka continued to live their dream together.
On January 17, 1961, and with Masataka by her side, Rita passed away at the age of 64. “From cuisine to customs, she came to Japan in an era when everything was so different, and she was trying so hard it made her even more adorable, and I just could not get over losing her.” Rested on top of a hill that looks down at the Yoichi Distillery, Masataka engraved both their names on Rita’s tombstone promising to be together forever. On the back of the stone reads, “in loving memory of Rita Taketsuru.”

Taketsuru meets Jessie Roberta Cowan, better known as Rita. They immediately fall in love, and against the will of their families, they are married in Glasgow in less than a year.

Two years later, the couple returns to Japan, but his employer Settsu Shuzo abandons the whisky project for economic reasons.
In 1923, Masaka is recruited by the Kotobukiya group, later renamed Suntory, and directs to build the first Japanese whisky distillery in 1924.

Oversees the construction of the Yamazaki distillery.

The Yamazaki distillery is completed.

Throughout her life, Rita will continue to act as Masataka’s greatest supporter, while trying her best to adapt to a very different culture. Japan will come to be her new home, and her adoptive country continues to remember her to this day. « Massan », a popular national television series broadcasted in 2014, even retraced the story of her time in Japan.
.

With Masataka’s contract reaching its term, Rita inspires him to realise his dream: build his very own distillery on the island of Hokkaido.

The northern island of Hokkaido is where Masataka finds the ideal site for the construction of Yoichi, a distillery built in the purest Scottish tradition.

For his first distillery, Masataka Taketsuru seeks similar conditions to Scotland, where he had himself learned everything about whisky making.

Yoichi is established in 1934, in the small eponymous coastal town.

This extraordinary location benefits from a cold, austere climate and local peat bogs were originally at the source of Yoichi’s peaty notes, while the salty sea breeze leaves its imprint on these whiskies of undeniable character. 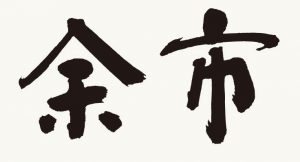 The Yoichi distillery is completed in October.

Distillation of whisky at Yoichi begins.

To this day, the distillation process has remained true to traditional methods.
At Yoichi, the pot stills are heated by a direct coal fire, a practice which the Scots have since given up, as it is difficult to control.
This imparts the whisky with an additional subtle smokiness and a rich, oily texture which are at the heart of Yoichi’s bold style. 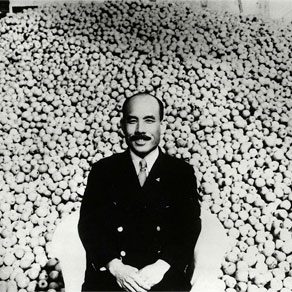 While Yoichi’s first distillates are maturing in oak casks, Masataka runs a fruit juice activity made from local Hokkaido apples.

Initially operating under the name “Dai Nippon Kaju”, meaning the “great Japanese juice company”, the company name is officially changed to Nikka Whisky in 1952, a contraction of NI-ppon and KA-ju, though this name already appears on the label of the first whisky released in 1940.

The first “Nikka Whisky” is launched.

Rita passes away at the age of 64 on January 17th.

Masataka is greatly saddened by Rita’s death in 1961, and copes with his loss by dedicating all his energy in perfecting the quality of his blended whiskies. The Super Nikka is released in her honour later that year. 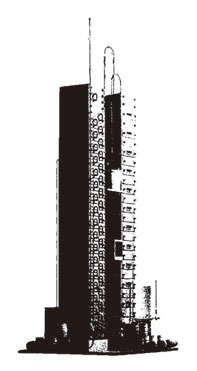 Two Coffey-type column stills (named after its inventor Aeneas Coffey) are imported from Scotland for the production of quality grain whisky, a necessity for improving Nikka’s blends.

Originally operating in Nishinomiya, the stills are based in Miyagikyo since 1999, on the same site as the malt distillery. Although the grain whiskies produced in these old-styled column stills do not enter into the single malt bottlings, they are a key component in Nikka’s blended whiskies.

The first Coffey stills are imported from Scotland and set up at the Nishinomiya plant in Hyogo prefecture. 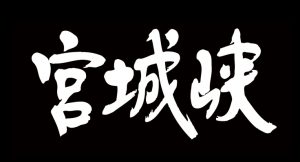 Following the success of Nikka Whisky, and to gain access to an even wider pallet of malt whisky styles to further the complexity of his blends, Masataka’s next step was to build a second malt distillery in the north of Japan’s Honshu island.

The Miyagikyo distillery is completed in Miyagi prefecture.

A stark contrast to Yoichi’s rough coastal conditions, the Miyagi region’s rolling hills and peaceful forests are renowned for its pure air and particularly clean water, which finally convince Taketsuru after 3 years of searching for the ideal location. The Miyagikyo distillery is built in a valley at the heart of this natural environment, from which the whiskies draw their elegance and purity.

In order to best transcribe the characteristics of this special location, the Miyagikyo distillery benefits from the latest innovations to provide optimal control on the production process. The pot stills are heated by steam, at low temperatures to ensure a soft and gentle distillation.

Masataka Taketsuru passes away just 10 years after the construction of Miyagikyo, at the age of 85. In the mind of the Japanese, he forever remains the founding father of Japanese whisky, and to this day, Taketsuru’s spirit continues to live on through the Nikka Whisky team, who continue to release innovate bottlings, while remaining true to Taketsuru’s philosophy and quest for excellence.

Masataka passes away at the age of 85 on August 29th

Nikka From the Barrel is launched.

The Coffey stills are moved from the Nishinomiya plant to the Miyagikyo distillery.

Taketsuru Pure Malt is launched in honour of Masataka.

Nikka is imported into Europe through Ben Nevis Distillery, and later by La Maison du Whisky.

The innovative Coffey Grain and Coffey Malt are launched.

The Coffey range is completed with the launch of Coffey Gin and Coffey Vodka.

After a Yoichi bottling is awarded the title of “Best of the Best” in an international blind tasting organized by Whisky Magazine in 2001 –the first time a non-Scottish whisky receives this honour– the recognition for the quality of Japanese malts and blends continues to grow among industry professionals, but also whisky connoisseurs and enthusiasts, making Nikka the most widely sold Japanese whisky brand in Europe.

Taketsuru would undoubtedly be pleased to know that his whiskies have gained a large following in Europe, the land where it all began.

WWA “Distillery Manager of the Year”

ISC “Distiller of the Year”

Whisky Magazine “Best of the Best”